For the writers I know personally and perhaps millions I don’t know, the aftermath of the US. election was a time of pain, disgust, shock, and perhaps terror isn’t an exaggeration. Right now, working on fiction might seem at best—self-indulgent and at worst—pointless.  In this situation, what’s the role of art? Any kind of art?

On one hand, last May, more than 450 American novelists, poets and literary critics signed an “Open Letter to the American People.” The subject was our newly elected president. If these artists had an effect, it clearly wasn’t enough of one.

On the other hand , in the NY Time Book Review of February 17, 2015, Mohsin Hamid claims that “Fiction can say publicly what might otherwise appear unsayable, combating the coerced silence that is a favored weapon of those who have power.”

In Ian McEwan’s Saturday, Baxter terrorizes a family, changing his mind about rape and murder because the comely daughter convinces him that she’s the author of Mathew Arnold’s “Dover Beach.” The poem stuns Baxter more than the nudity he demanded of her. Credible? Maybe that depends on the reader. Yet, in any case, the semi-miraculous save starkly contrasts with the father’s earlier observation that "His crime was to stand in the safety of his bedroom, wrapped in a woollen dressing gown, without moving or making a sound, half dreaming as he watched people die.” Throughout McEwan’s work, watching without acting always constitutes a crime.

Where does this leave the novelist? Maybe you want to write because it improves your immediate environment: a bit of reality more credible than reality itself in a world besmirched with socio-political rather than literary fictions.

Art isn’t only for its audience. As Pablo Picasso put it, “We artists are indestructible; even in a prison, or in a concentration camp, I would be almighty in my own world of art, even if I had to paint my pictures with my wet tongue on the dusty floor of my cell.”

According to E.A. Bucchianeri, “While art thrives on the blazing colours of scandal, literature blossoms on the dark soil of tragedy.”  Personally, I would very much prefer a different source of inspiration than what I, among millions of others, view as tragedy. But it won’t keep me from revising my novel, although it’s not a political one.

Besides, many believe that art, particularly fiction, affects its audience most deeply with drama, metaphor, subtext, and understatement. This suggests that railing about injustice won’t necessarily produce art. Yet, by grappling toward truth whether with paint (consider Picasso’s “Guernica”) or words, isn’t all art “Protest Art”? Isn’t all art at least theoretically political? In my own way, I will continue protesting.

This is why. Wednesday morning, November 9, I happened to read “In Exile with Don Quixote,” by Ariel Dorfman, who wrote

Those of us reading Don Quixote in 1973, in an embassy we could not leave, surrounded by soldiers ready to transport us to stadiums and cellars and, ultimately, cemeteries, responded viscerally to the novel. That continuous exultation and practice of liberty, both personal and aesthetic, was inspiring. —NY Times, 10/9/‘16

Dorfman alluded to Miguel de Cervantes Saavedra’s confession in the prologue of this brand-new genre(1605) that this novel was “begotten in a prison where every discomfort has its place and every sad sound makes its home.” If he could compose a form that barely existed from inside a dungeon, what can you do? What should you do?

As Paul Robeson said, ‘Artists are the radical voice of civilization.’ Each and every one of you in this room, with your gifts and your power and your skills, could perhaps change the way in which our global humanity mistrusts itself. Perhaps we as artists and as visionaries, for what’s better in the human heart and the human soul, could influence citizens everywhere in the world to see the better side of who and what we are as a species. 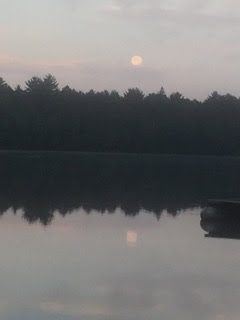 Tip: Now more than ever, make your voice heard.
Posted by Laurel Yourke at 8:48 AM