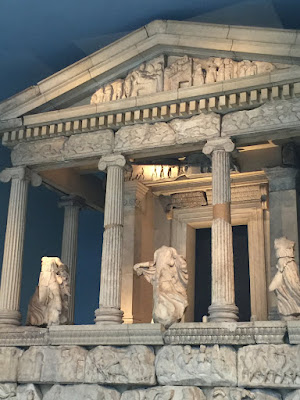 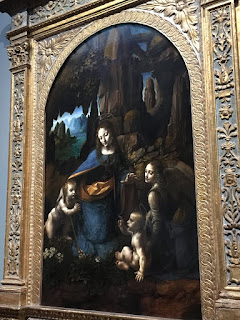 Can you afford not to find the time?
Posted by Laurel Yourke at 8:05 AM No comments:

On Taking Time and Leaving Space

Exploit opportunity. That’s one distinction between good fiction and great. Sometimes, instead of faulty plotting or limp prose, the issue is timing. Let’s say the protagonist and hunky guy have been flirting for over two hundred pages. When he—and she or he—finally finish the chablis and hit the sack, why rush that? And you certainly don’t want to summarize, as in, “They had the greatest time ever.”

And in order to deliver optimal emotional and dramatic impact, maybe you can do even more. Whoops, someone has an asthma attack or breaks out in hives. Does the estranged spouse return for a heart-to-heart, courting interruptus? What about the cat, the dog, the teenage daughter?

Go for the extra twist, never settling for the obvious. Then, develop the events that fulfill and startle readers—that haunt forever. Pause to think of your favorite moments in fiction. Are they ever ordinary? Rushed?

Be careful, though. Capitalizing involves a sort of tightrope between underdone and overwrought. To avoid the latter, watch out for these:

Add vigorous and original events and details, not familiar or melodramatic ones.

Fiction thrives on hinting and suggesting, not clarifying or explaining. Which doesn’t, of course, mean you want confused readers.

~ Say it right the first time.

Then you won’t be tempted to repeat, which usually frustrates more than it emphasizes.

~ Slow down the good parts.

Writers tend to meander through detail, then zip through action and drama. Why? The humdrum and non-confrontational amass quickly,  not to mention more comfortably. Often, though, the scenes writers find most challenging are those their readers find most enchanting.

~ Carve out a space.

Don’t clog critical moments with layers of description or filler. Instead? Create a sort of pause-and-catch your breath moment. To illustrate, say a mother is awaiting news of her soldier son. Why not delineate her facial expression, the worry in her eyes before learning the truth? This delaying tactic prompts the reader to experience suspense along with her, to internalize the magnitude of a moment that resembles a mini-climax. How else will readers notice?

As you move through the world beyond your novel (remember that one?), observe the reactions of people—and yourself—to momentous moments. Then you’ll have a better sense of how to time and design such moments in your fictional world.

Tip: Capitalize on the subterranean—not at all obvious—opportunities your novel offers.
Posted by Laurel Yourke at 7:31 AM No comments:

From Story Board to Storyboard

Today, storyboard connotes is a series of illustrations or key points illustrating the concept for a film or TV program. Like many techniques from the screenwriting world, this method is also wonderfully useful for novelists and so popular that you’ll find numerous online options for help. But the basic idea is actually much older. Much, much, much older.

Illiteracy, thankfully now far less widespread, was once the norm. If you wanted people to understand the story, you had to show it. Only pictures would do.

For example, in one of the oldest storyboards, the palace of the Neo-Assyrian King Ashurnasirpal II (883-859 BC) at Nimrud (now in northern Iraq) had larger-than-life slabs depicting royal and religious ritual. In the photos below, a winged god drops offers pollen from the scared tree of life, insuring the fertility of the land and its people. 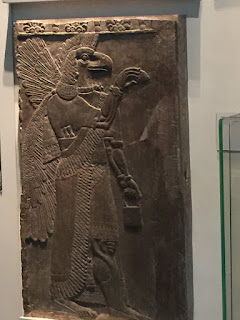 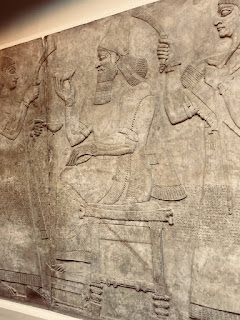 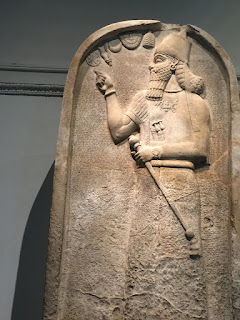 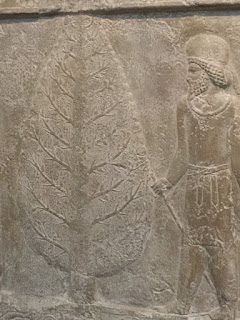 Though novelists use words, the storyboard can give the author an equally useful visual. As Candace Williams observes in “Storyboarding for Novelists,”

Storyboarding is not a rigid plotting device. The whole point of the board is that it’s flexible. The greatest advantage is seeing exactly how your novel is “built,” just as an architect refers to a blueprint.

The storyboard is especially useful to these novelists:

If you’re a plotter, this lets you assess pivot points even more efficiently. If you’re a pantser, a storyboard lets you see where you’re going with the least restriction possible.

~ Internal world addicts. Do you revel in oodles of talking and thinking and more of the same?
Provide an image for each scene, and something will happen in the physical world.

a storyboard, you can write the fourth scene, sixteenth, then second and so on. Compose in any order you like and still see where you are.

In an interview, Rebecca Skloot, author of the complex and successful The Immortal Life of Henrietta Lacks, addressed the complexity of her creative nonfiction with index cards.

Chuck Sambuchino, in “Storyboarding For Success: Plotters vs. Pantsers,” reminds that:

The magic of a storyboard is turning a book idea into a visual tool, which makes the story’s structure much easier to grasp and handle. A storyboard can be drawn on a board, a piece of paper, or in a computer file.

The storyboard reveals where the climax is, and, in fact, whether you have a climax at all! The inciting incident and major moments that earn the ending are visible—and thus readily reparable. Use index cards, sticky notes, sheets of paper, an Excel spreadsheet, or the many free apps and templates.


Tip: Storyboarding’s been around for a long, long time. With good reason.
Posted by Laurel Yourke at 7:07 AM No comments:

Inexperienced comedians and actors often wander the stage aimlessly. Sometimes that’s part of the schtick. More often, though, random action signals nervousness and simply distracts. So in theater, directors often warn actors that you can’t just cross the stage because you feel like you’ve been motionless for too long. Movement originates from motivation.

Tip: Never let your character say or do anything without a current, immediate motive.

In “Motivation-Reaction Units: Cracking the Code of Good Writing, ” K.M. Weiland explains the “motivation-reaction units,” or MRU’s, that Dwight V. Swain introduces in Techniques of the Selling Writer:

In a story, everything that happens can be separated into two categories: causes (motivations) and effects (reactions). Once you grasp this, all you have to do to create solid and comprehensible prose is to make sure your MRUs are in the right order.

The First Gate blog explores this further. The:

Motivation-Reaction Unit is the fundamental building block of an action sequence (it’s important to stress that it does not apply do description, exposition, or reverie).  It’s pretty simple:  something happens, the hero reacts to it, the situation changes, and something else happens.  How characters react to events will largely determine their plausibility and how closely we bond with them. — 1/21/’11

If perhaps a stream of MRU’s seems like extra work, first consider how logical this is. Then consider all the areas you’ll improve.

To link motive to action, you must clearly identify character psychology.

In real life, people do things for reasons. When they don’t, others ask, “Where are you going?” Or, “What’s suddenly bothering you?” Novels need to supply the answers readers might want to ask. This is especially true when characters change their minds or make major decisions. But. This isn’t permission for a paragraph or two of rumination, because there’s never permission for that. It does mean one sentence pinpointing explicit motive.

A character hears something and thus does something. Causal and realistic. It also tests whether stage business serves some purpose beyond interrupting the dialogue.

Within the scene, these MR Units mirror what Linda Seger calls “pressure points”—the five or six turning points forming the spine of the novel. Use MRU’s, and the structure of each scene parallels the structure of the scenario.

Link motive to motion and action, and you enrich both plot and characterization. Because“why” has always been fiction’s most compelling component.

Posted by Laurel Yourke at 8:04 AM No comments: