Thanks to Wyatt-Mackenzie publishing and Purcell Agency. Equally important, here’s a thank you note to every writer I’ve worked with, whether online, over a weekend, during a retreat, or in a university department or critique group. Maybe you and I barely remember each other, but still I thank you. Because however much I taught you, you taught me much more. Each of you contributed to realizing the dream of composing, then publishing Beyond the Fist Draft: Deep Novel Revision.

Around the time I published my first book—Take Your Characters to Dinner—my colleague, Marshall Cook joked that “It takes a village to publish a book.” He was kidding, as he often did. But at the time neither of us realized how many sources of wisdom and inspiration contribute to the completion of any book. 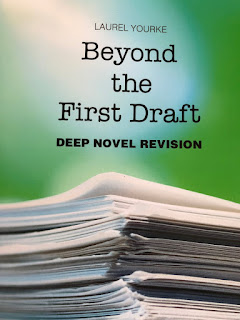 That may seem counter-intuitive, because writing is customarily associated with seclusion. And it’s certainly true that when you’re at the notebook or keyboard, there’s only you and the space you hope to fill. Numerous complaints about this syndrome exist. Here’s Ernest Hemingway:

Writing, at its best, is a lonely life. Organizations for writers palliate the writer's loneliness but I doubt if they improve his writing. He grows in public stature as he sheds his loneliness and often his work deteriorates. For he does his work alone and if he is a good enough writer he must face eternity, or the lack of it, each day.

Writing is a lonely job. Even if a writer socializes regularly, when he gets down to the real business of his life, it is he and his type writer or word processor. No one else is or can be involved in the matter.

Rachel Carson concludes that solitude is a phenomenon writers must embrace:

A writer’s occupation is one of the loneliest in the world, even if the loneliness is only an inner solitude and isolation, for that he must have at times if he is to be truly creative. And so I believe only the person who knows and is not afraid of loneliness should aspire to be a writer.

So it’s not whether writing is lonely, but whether you can mitigate that. Of course you can.

Everyone agrees that writers must market. At a recent conference, Laurie Buchanan said to me, “Getting people to know about your book is a way of honoring it.” So whether you’re published or hope to be, make connections. Meet not only authors, but also agents, publishers, booksellers, bloggers, readers, and fans.

Networking isn’t just for marketing; it’s for inspiration. Get yourself a writing partner. Join a critique group. Attend conferences, weekenders, and retreats. The support you’ll find there helps you write the best book you can.

My own antidote to loneliness is the blessed experience of working with writers in numerous venues. What could do a writer greater good than nourishing an addiction to books on writing, pondering the questions writers pose, and providing on the spot illustrations of technique. What better way to study the craft? What better way to become a better novelist? So thank you!

Tip: Keep the good company of writers so your own writing dreams can come true. 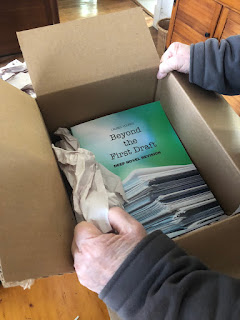 Posted by Laurel Yourke at 7:15 AM No comments:

Hard. Boring. Exhilarating. Scary. Inspiring. Painful. Transformative. Mention the word “revision,”and each novelist will respond differently. With one exception: writers either love revision or loathe it.

There’s plenty of reasons, many legitimate, why you might dislike the process. Writers don’t always know where to start or how to fix what they find.  When novelists accept the questionable advice to just spew out first draft, the result can be pretty awful. And then the fun’s over. Now it’s time to concentrate, to work.

Besides, cutting can be painful. The expression, “Murder your darlings,” which has a long, complex history via such greats as F. Scoot Fitzgerald and William Faulkner, sums up the way writers often feel. It takes energy and effort to get the words down. What do you mean I have to discard them?

In my experience, cutting back is the crucial act that allows the vitality, precision and emotional heart of a piece of writing to emerge. ― Pamela Erens

So, usually, the first act of revision is eliminating everything you can willingly discard, and then a bit more. After all, if the great moments and sentences are buried, how can you know what to keep?

How to start cutting:


The great news? Once you pare down, you can see how to proceed. These questions might help you get started:

~ Is the scenario original and substantial?
~ Do the characters seem both consistent and alive?
~ Is enough at stake?
~ Do chapters and scenes begin and end with hooks?
~ Do you capitalize on your novel’s point of view?

After addressing the fundamentals, you can smooth sentences and perfect word choice.

Is this hard work? Absolutely. Is it worth it? As Stephen King put it in a Writer's Digest interview

The writer must have a good imagination to begin with, but the imagination has to be muscular, which means it must be exercised in a disciplined way, day in and day out, by writing, failing, succeeding and revising

There you go. First rigor, then riches—at least in terms of craft, if not royalties.
Posted by Laurel Yourke at 10:58 AM No comments:

Email ThisBlogThis!Share to TwitterShare to FacebookShare to Pinterest
Labels: " revision, "murder your darlings, cutting back in fiction, Pamela Erens, repetition, scenario. characterization, Stephen King, why and how to revise

The Physics of Emotion

Physics explores the essence and behavior of matter and energy.  In terms of fiction, this parallels the distinction between how characters feel and what they do or say. The difference is crucial, because when you say that Nancy is “angry,” or worse, “incredibly angry,” you’re not saying much. You’re simply “telling.” To “show,” readers need to participate in what you want to convey. For that, you need subtext or physicality, whether literal or symbolic.

Instead of abstractions like “rage” or “frustration,” let readers hear how a character via what she doesn’t say. For example, “I see. That’s all you have to say about it.” The two sentences subtly capture an entire history.

In “Showing–and Telling—Emotion in Fiction,” Dave King observes that “All good writing starts with good watching,” and, yes, that’s a terrific place to begin.

Waiting in line, passing time in the airport, or nibbling in a restaurant, subtly, of course, check out body language. Can you guess how people are feeling even if you can’t hear what they’re saying? And if you can, why? What did you observe?

For further revelation, consider the work of Auguste Rodin. According to Nicole Myers, associate curator of European Painting and Sculpture,

Rodin’s capacity to capture the human spirit in all its nuances was unrivaled. He was one of the first artists to consider fragments and partial figures to be complete works of art capable of expressing even the most complex thoughts and emotions. 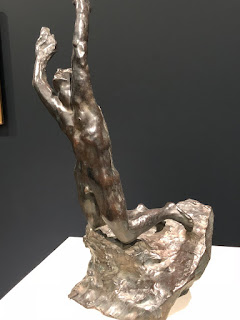 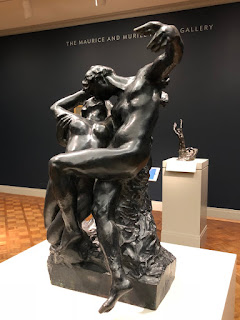 Even without knowing the titles of these two works from the current Rodin exhibit at the Art Institute in Chicago, we can guess which emotions the artist wanted to convey.

But how does that work in fiction? Actually, with remarkable similarity. Discard the notion that anything intangible, straightforward, and intellectual can capture feeling. In Middlesex, Jeffrey Eugenides describes this phenomenon:

Emotions, in my experience, aren’t covered by single words. I don’t believe in ‘sadness,’ ‘joy, or ‘regret.’ Maybe the best proof that the language is patriarchal is that it oversimplifies feeling. I'd like to have at my disposal complicated hybrid emotions, Germanic train-car constructions like, say, ‘the happiness that attends disaster.’ Or: ‘the disappointment of sleeping with one’s fantasy.’

When we’re feeling emotions rather than writing about them, the event happens in a body. It needn’t even be a human one. There’s no question about whether cats are bored or irritated or dogs grateful. No words needed.

Words, of course, are the writer’s only tool. But some words don’t do what they’re supposed to. A lot of fiction is summary, often quite abstract. Emotions, though, are born in the realm of sensation. So if you want readers to feel them, you can’t describe. You must make feelings live.
Posted by Laurel Yourke at 7:02 AM No comments:

Compress it! Pace It!

For the fiction writer, repetition is a trap, and a tough one to avoid. Later events must be set up, new characters need to know what readers already do; and sometimes it takes a few mishaps—possibly in the same setting—to get the protagonist properly cornered. Writers often hope that so long as something’s slightly different, such as the same anger for the same reason but more intently, readers will find it new. Sadly, that’s rarely the case.

Nor will scene versus what’s known as summary/sequel/narrative entirely solve the redundancy problem. Summary can magnificently foreshadow or dispense information. But the high stakes that fiction needs frequently originate in scene rather than summary. Or between them.

Tip: Exploit the underused territory between scene and summary.

The mixture of narrative and scene creates the illusion of “live” fictional time, just at a faster pace.

Because she hadn’t contacted him since returning to New York, Ed reared back when Anna tried to hug him.

That’s a really brief, somewhat oversimplified example of the landscape between a full-blown scene and an entirely collapsed summary. Yet the sentence illustrates a swift summary (the dependent opening clause) preceding the start of a scene (the independent final clause).

Combine scene with summary, and you can accelerate the pace, or speed at which events pass readers. Instead of revisiting what readers have already seen (she hasn’t contacted him since returning to New York), modify something. Did Anna start to call Ed? Did Anna run into her former fiancé? Did Ed’s voice mail quit functioning? Change helps pursue not only the original source of tension and perhaps something else entirely.

That’s because novelty is not only what readers want but what novelists need. Bypass the parallel or similar by shaking things up.  That’s a boundless source of tension, emotion, and originality, not to mention the potential for symbolism, suspense, and complex characterization.

What kinds of questions shake things up so that nothing ever feels exactly the same?


These questions suggest ways to manage momentum. And in “5 Ways to Pace Your Story,” K.M. Weiland observes that

Pacing is like a dam. It allows the writer to control just how fast or how slow his plot flows through the riverbed of his story.

Pace originates not just from syntax and rhythm, but also scene and summary. Explore the fertile territory between those last two.
Posted by Laurel Yourke at 7:54 AM No comments: