Spring and the Novelist 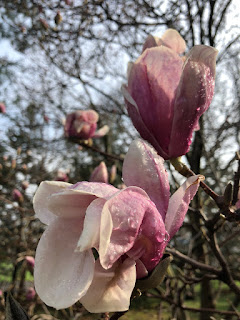 Spring. Lots of possibilities there. The season of hope and rejuvenation. To grow leap, originate, open, force.  A renewal, an opening, a flexibility. And those are only the basics. Might a fiction writer put any of this to use?

I can shake off everything if I write; my sorrows disappear, my courage is reborn. But, and that is the greatest question, will I ever be able to write anything great… — Anne Frank

Why not use the awakening of the landscape to wake your passion for your own novel? 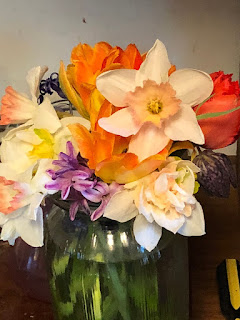 Why not use the startling nature of spring to discover something new about your scenario, protagonist, opening, ending, or even your own writing process? 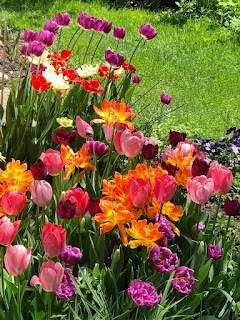 Characters only grow by sprinting out of lethargy and into the fray.

Why not try cornering them even more than usual?

Without urgency, fiction falters. Readers seek propulsion, over and over: the start and end of each scene, the first chapter, the midpoint, and so on.

At your recent talk titled “Urgency and Momentum” you introduced a new theoretical framework you’ve been exploring, that you called “request moments.” You spoke about how much of the time, most if not all of us are doing not what we want to do but what other people ask of us either directly or indirectly. Your point was to arrive at a type of necessity, that creates, as you put it, “forces in narrative that make characters do what they do.” Many stories with real urgency and momentum grow out of a simple request; someone says to someone else, “There's something I want you to do.”  — Susan Tacent Interview with Charles Baxter

Why not seek techniques that entice your readers?

Of course like other people, many novelists find spring addictive. Time to be outside—to row, or hike, or garden. But no matter how seductive that call, don’t let it overpower your muse.

Tip: Spring isn’t just a season or a verb. It’s a process.
Posted by Laurel Yourke at 12:02 PM No comments:

If only you could add the right ingredients and without watching the flame, maintain a roiling, steam-producing rhythm without the flame rising too high or sinking too low. But more cooks can smoothly simmer spaghetti than writers can instinctively reach The End with optimal heat.

Fortunately, there’s a straightforward (though not necessarily painless) method every writer can use. And it’s easier than boiling an egg.

The answer is an outline, but a unique one. Novelists frequently associate outlining with the first draft, since a plans promotes credibility and causality from the start. Besides, if you get stuck, as often afflicts the novel’s middle, at least you know where you thought you were headed.

Useful as such can outline is, it won’t help you assess tension. Here’s something that will:

For each scene, complete first I then II. Because you want to focus on conflict,  it’s crucial to start with the obstacle, desire, force, or change driving the scene. Hint: verbs best express that.

I. Write one brief, non-detailed, super-short sentence that captures what the scene’s point of view character wants—or doesn’t. Here are a few examples:

Carol fears humiliation if Don dismisses her flirtation as ridiculous.

Ed agonizes over Dr Fred sharing only part of the medical truth.

* Part I reflects tension and suspense. Passion, sexual or otherwise, is always involved.

2. A brief contextual statement of where the characters are and what happens. Such as:

Beth arrives late at the restaurant she reluctantly agreed to and leaves Abe there alone.

Don ignores Carol rubbing herself against him during a study session at the college library.

Dr Fred admits that Ed is ill but refuses details even when Ed insists.

* Part II is context. It’s where the characters are and what happens to them.

Like most things, this technique gets faster and easier with practice. Stick with it, though, and you’ll have a way to evaluate whether each scene possesses the oomph to be a scene. More important, you’ll not only know what happens, but what matters. Readers choose fiction for the emotion it evokes, and that comes from—high stakes.

Tip: Whichever method you choose, assess the tension in every scene of your novel.
Posted by Laurel Yourke at 6:40 AM No comments:

Writers and writing coaches can argue passionately about whether story springs from plot or characters. The divide has become particularly pronounced since the appearance of “literary” fiction, a genre which implies it might be okay to write a novel where a gorgeous voice and memorable characters compensate for lots of stasis.

On the opposite end of the spectrum, some novels offer escalating danger, but it befalls characters whom readers can’t relate to and don’t care about.

Isn’t it the mesh of character and plot that propels story? After all, adversity is the best way to meet characters—to test their mettle.

As K.M. Weiland puts it in “Plot vs. Character: Which Is More Important?”:

Fiction is about balance—in so many ways—and certainly nowhere more so than in the matter of plot vs. character. Good writing should not be about pitting plot against character, but rather about finding the harmony between them.

The indivisible integration of plot + character has always built narrative. And isn’t that still, despite numerous experiments, what the novel is for? After all,

In our modern age, there are writers who have heaped scorn on the very idea of the primacy of story. I'd rather warm my hands on a sunlit ice floe than try to coax fire from the books they carve from glaciers. ― Pat Conroy, My Reading Life

Tip: Story comes from what happens to characters readers are invested in.

You probably agree. But what if, like many novelists, you’re either fantastic at tension-rich events or fantastic at characters sufficiently full-fleshed to cast shadows. Perhaps you worry that you'’ll never be equally skilled at both.

The remedy? Quit viewing character and plot as separate entities. Happily, this works whether you’re starting a first draft, halfway through it, or at any point in the revision process.

Perhaps the best way to visualize characters in context is some version of a Scene Goal Outline. So what’s a Scene Goal, anyway? An “Intense, explicit character desire that impels choice and action” (Laurel Yourke, Beyond the First Draft).

For each scene, distill the goal down into as few words as possible. How else can you assess whether you’re revealing characters and propelling the story forward causally rather than causally?

Watch your verbs. Contrast “was worried about the next hour” versus “terrified about the phone ringing.” The latter verb reflects character emotion and thus causes action. Since scenes are about tension, a Scene Goal always involves forcing characters to act rather than think or react.

How many Scene Goals do you need? Ideally, one for each scene. Keep those goals super-short and harness verbs to reveal character feelings, since that’s what connects readers to story.

Use the Scene Goal Outline to make the plot and dramatic personae intertwine inseparably. Because, as Heraclitus put it, “Character is fate.”
Posted by Laurel Yourke at 1:02 PM No comments: