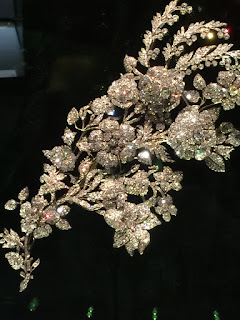 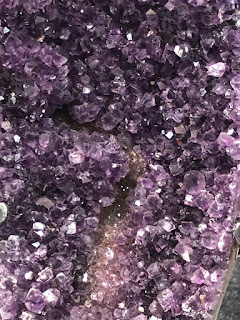 Tip: “Bling” makes fiction sparkle, but only with moderation, understatement, and good taste.
Posted by Laurel Yourke at 11:56 AM No comments:

The Psychology of Imagery

It’s established that imagery/visualization helps athletes succeed, so imagine how imagery enhances the reader/writer connection. Even in print, and especially in fiction, a picture is still worth a thousand words. Used deftly, verbal evocation of the five senses creates a world where readers feel what the characters do, see what the novelist does.

Tip: Create not just a plot, but one readers can experience—through their five senses.

Here’s how that works. In The Sacred Wood, T.S. Eliot refers to the pedantic-sounding but not actually overwhelming concept of the “objective correlative”:

The only way of expressing emotion in the form of art is by finding an “objective correlative”; in other words, a set of objects, a situation, a chain of events which shall be the formula of that particular emotion; such that when the external facts, which must terminate in sensory experience, are given, the emotion is immediately evoked.

This observation warrants some unpacking. An objective correlative can link (“correlate”) a subjective idea or emotion with the external world (“objective,” relating to something physical, like an object) in a neutral way (again “objective,” but this time in the sense of impersonal).

In Wired for Story: The Writer's Guide to Using Brain Science to Hook Readers from the Very First Sentence, Lisa Cron observes that

what draws us into a story and keeps us there is the firing of our dopamine neurons, signaling that intriguing information is on the way.

And the more scientists learn how about the brain, the more they discover connections between plot or imagery and reader emotion. Want readers to keep reading? Integrate what happens with opportunity to vicariously interact. The source of  that interaction? Language summoning one or more of the five senses: in other words—imagery.

Concrete details eliminate “telling” what you ought to “show.”

~ Bridge from the familiar to the unfamiliar.

Need to explain something? The technique of analogy or metaphor is about as old as ideas are. Comparison helps readers grasp what’s unclear or difficult, which could be anything from quantum mechanics to the protagonist’s tragic flaw.

~ Contributions from your own subconscious:

one of the things you do as a writer and as a filmmaker is to grasp for resonant symbols and imagery without fully understanding it yourself. —Christopher Nolan

Readers identify with what they can see, hear, etc. But they can’t identify with references to “terrible agony” or “delightful happiness.” James Bonnet’s paraphrase of Carl Jung explains why abstraction deprives readers of the protagonist’s world and the events there:

The auditor experiences some of the sensations but is not transformed. Their imaginations are stimulated: they go home and through personal fantasies begin the process of transformation for themselves.

Why not provide that possibility of transformation for your readers?

Posted by Laurel Yourke at 8:29 AM No comments:

Must Your Readers Unpack for You?

In fiction, as on vacation, traveling light frees you to appreciate the scenery. Few of us leave town to exhibit an immense wardrobe, and probably even fewer read novels in order to study. Still, you won’t enjoy the trip if everything you brought is excessively flimsy or bulky, and many readers prefer novels offering a bit of heft. In both cases, the trick is packing thoughtfully, and taking responsibility for the contents of the suitcase.

Your novel’s length determines the size of that suitcase. Yet fiction’s subject matter determines how much unpacking someone must do. Who’s that someone? The novelist—not the reader.

In one sense, “unpacking” involves revelation of the individual components that comprise a complex concept. It makes sense that writers should provide this, so one wonders why more of them—in every genre—sometimes omit the explanation readers need in order to follow. Anxiety plays a role. What if “just saying it” will irritate, bore, or condescend?

The rest of the answer lies in what Steven Pinker calls “The Curse of Knowledge”:

It simply doesn’t occur to the writer that readers haven’t learned their jargon, don’t seem to know the intermediate steps that seem to them to be too obvious to mention, and can’t visualize a scene currently in the writer’s mind’s eye. And so the writer doesn’t bother to explain the jargon, or spell out the logic, or supply the concrete details — even when writing for professional peers.—The Sense of Style: The Thinking Person’s Guide to Writing in the 21st Century

Pinker blames unclear, densely packed passages on “chunking,” or storing details in clumps. Inside the writer’s head, this process works fine. But readers require “unchunking.” Without it, you offer A = B, A = C—without including that crucial middle step of B = C.

Pinker also identifies another opponent of clarity: functional fixity. As with structural rigidity, the issue here is your ability to rearrange details for the reader’s benefit. Or are you stuck with whatever pattern you first conceived? That may not be the ideal way to explain.

Ready to unpack? Try these techniques.

It’s not you! It’s doesn’t matter what you know—only what your readers do.

It’s a common myth that difficult ideas require abstractions. But the greatest art is clarity without oversimplification.

Divide your sentences. Start new paragraphs. Both matter more than you think.

People usually learn by attaching new facts and concepts to more commonplace ones. Break down those big chunks, perhaps comparing them with the well-known.

Tip: For a smooth fictional journey, keep disorganized, overflowing baggage out of sight.
Posted by Laurel Yourke at 7:39 AM No comments:

Writing coaches often urge novelists to “let it flow.” Go ahead and write as fast as you can type, which, for most of us, is faster than we can think. In The Basket Weaver, for example, Jan Marquart suggests: “Sit quietly, listen, listen again, then listen some more and write out everything the voice says with no censoring-–none-–not one word.”

For some novelists, there’s no better strategy. But this approach works only if you’re willing to discard everything—yup, everything—that’s self-indulgent, redundant, or second rate. That necessitates more courage than many writers, including yours truly, possess.

You need both individuality and artistry. According to Patricia Lee Gauch,

A writer's voice is not character alone, it is not style alone; it is far more. A writer's voice like the stroke of an artist's brush—is the thumbprint of her whole person—her idea, wit, humor, passions, rhythms.

If you accept that painters have “voices,” J. W. Turner beautifully illustrates freedom within restraint. He studied, mastered his craft, and produced solid conventional work like this: 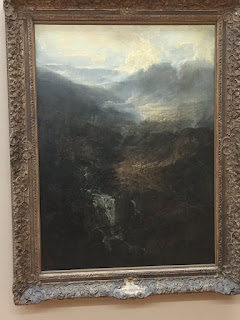 But if that’s all he ever did, he’d never have his own gallery in London’s Tate Museum. Historians
suspect eyesight played a role, but, in any case, here’s why he’s remembered: 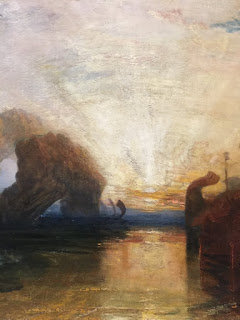 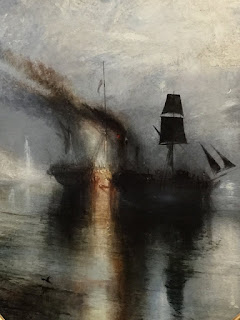 This is where writing commandments apply. Your uncensored self belongs only in a journal. And although we cherish the personal writing of  “the greats,” this is usually due to what they crafted for public consumption—through that “negotiation.”

Writing rules not only reduce “telling,” meandering, and abruptly jolting. Consider your readers, and you create a sort of psychological safety net.  Thasia Frank and Dorothy Wall suggest that

Most writers struggle to unearth voice—not only because one’s own voice is simply too familiar, but also because to speak from your voice means confront your world, your dreams, and your entire life raw and unsoftened by explanations.

In the most exquisite sort of irony, you’re less vulnerable when your narrator and characters stand between your naked self and your readers. And without getting psychologically and linguistically naked, how can you find and use your voice?

And here’s why that’s where it’s at. According to David Malouf,

I've long come to the conclusion that when people say they can't put a book down, they don't mean they're interested in what's happening next; they mean they are so mesmerised by the writer's voice and the relationship that has been established that they don't want to break that.

Isn’t that exactly what you want your novel to do?
Posted by Laurel Yourke at 6:43 AM No comments: