The Good and the Ugly

Is the writer’s task to reveal the entire picture of a character, including hideous fantasies and metaphorical warts, or will that drive writers away? The best answer: Yes. Also no.

Some fiction tracks  immoral anti-heroes with perfidious secrets. In Ian McEwan’s Solar, Michael Beard is a Nobel prize-winning physicist who has bottomed out, both professionally and romantically. And here’s a snapshot of Nino Ricci’s protagonist in The Origin of Species:

Alex wondered why he was following this man around like his pet. It was better than just going stir crazy out here was what he told himself. But it wasn’t just that. Somehow, the more time he spent with Desmond and the more reasons he amassed to detest him, the more he felt in his thrall. He wasn’t sure what sort of pathology might lie behind this, if he was drawn to him because they were so different or because he thought them the same.

Throughout this novel, the reader (or at least this one) keeps yelling, “No, don’t do it!” Yet, over and over, Alex makes the worst possible choice. Psychologically, perhaps that’s cause for cheer, as in, “I’d never make that mistake.” Emotional engagement comes not from admiring the character, but wanting to help while secretly believing we could do better.

In “How to Make Unlikable Characters Likable,” Jessica Brody offers this advice:

Tip 1: Give your hero one redeeming quality or action (even if it’s small) at the beginning of the story.Tip 2: Give your hero an enemy…a really evil one.Tip 3: Make us “love to hate” them.

Does that always work? The unlikable protagonist functioning as unreliable narrator in Claire Messud’s The Woman Upstairs generated a literary uproar. Here’s the author’s response: “If you’re reading to find friends, you’re in deep trouble. We read to find life, in all its possibilities. The relevant question isn’t ‘Is this a potential friend for me?’ but ‘Is this character alive?’ ”

Though Meg Wolitzer’s The Interestings produced no uproar, she agreed: “One thing I’ve noticed that’s a kind of disturbing trend is fiction about and by women who the reader is meant to feel ‘comfortable’ around—what I call slumber party fiction—as though the characters are stand-ins for your best friends.” So likable has its place, as does discomfiting.

If the best fiction changes same-old into new, then making sure your protagonist is likable might be the safest but not necessarily best bet. How can you keep readers turning pages?


Tip: If characters seem whole and alive, readers are more apt to tolerate their shortcomings.
Posted by Laurel Yourke at 1:32 PM No comments: 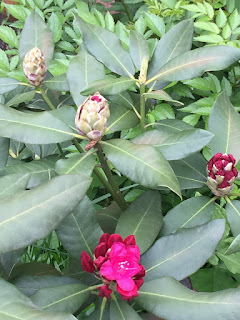 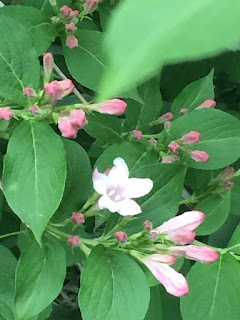 Buds are full of promise. How large will this one get, how fragrant, how multi-faceted, and will the culmination prove worth the wait? If a bud is a rich with potential, how much more so a novel’s first sentence, paragraph, page, chapter. There you entice readers. Or lose them.

Openings hint at what we can expect, help us decide if we should await the outcome. Contrast these:

Our quick breath encircled our heads in the late-winter air as he pulled me by the hand, through lines of Model Ts and Cadillac Coupes, toward the glow of the Colonial Theatre. My body coursed with elation and guilt, every bit as intoxicating as the rum drinks he'd mixed for us out of the trunk of his car. The frenzy of the Jazz Age had overflowed from the cities into smaller towns like ours in music, film, fashion, and literature, resulting in restlessness and tension between generations and ideals. Fueled by the energy of the new, we had toasted our agreement: That night it was only us in the world, and we would live like it was ours.     He'd lifted a triple-stranded pearl necklace over my head and set it on my skin, kissing the scar on my collarbone, a relic from the first night we'd found each other. He whispered that the necklace was only costume jewelry, but one day he'd buy me the real thing. --Erika Robuck, Fallen Beauty

The girl standing in the foyer when Alex went down to get his mail, trembling slightly on her cane, was Esther. Not a girl, really: a woman. Everyone in the building knew her. Or everyone, it seemed, except Alex, who, in the few months since he’d moved here, had never quite managed to be the one to open a door for her, or put her key in her mailbox, or start a conversation with her in the oppressive intimacy of the building’s elevators.     She was looking out through the plate glass of the entrance doors to the street, where sunlight now glinted off the morning’s earlier sprinkling of rain.     “I wouldn’t go out there if you don’t have to,” Alex said, then regretted at once his admonitory tone.     From the confusion that came over her, plain as if a shadow had crossed her, it was clear she hadn’t understood.     “The rain,” he said. —Nino Ricci, The Origin of Species

Individual readers will prefer one approach over the over. And why?
The average novel reader won’t consciously pose even one of these questions. Still, readers instinctively consider quite a lot of this when checking the opening to decide if this book’s for them. What does the first page offer? Does its potential unfurling seem like something worth following? Whatever the source, is there a genuine hook?

Tip: Your novel’s opening matters more than anything that follows.
Posted by Laurel Yourke at 11:44 AM No comments:

Chocolate and the Novelist

Picture, then inhale the scent, of your favorite flavor. Better even than lilacs, right? Chocolate offers poetry for the tastebuds, antidote for sadness, compensation for anxiety or stress. It’s also a reminder to everyone, including novelists, that enough is enough. 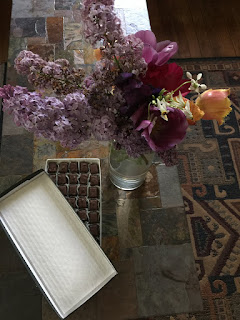 Take details. Consider the many, many paragraphs of your novel that aren’t drama, action, or dialogue.  These fall into two general categories.

Some narrative is immediately and directly integrated with the plot, thus creating or sustaining tension. Examples? Backstory, foreshadowing, some kinds of setting, or revelations of resources characters possess or lack. Description intrinsically linked to plot often zips along.

But a lot of the detail in novels has nothing to do with plot. Imagery and information often defeat tension. Still, novels would be mighty thin without description, symbolism, character nuance, and topics from art through zebras.

Narrative, plot-oriented or otherwise, always affects pace, though the first  category far less than the second. That’s where chocolate comes in. First it fills your mouth with something besides your fingernails while you decide how much you need for clarity, reader satisfaction, and agent attraction. Chocolate soothes during the painful acceptance that you’re not a mindreader. Also, it warns that even something glorious can overwhelm, even nauseate, if over-indulged.

You might consider all those add-ons that make fiction worth reading—and writing—as the sweet tang of chocolate: fantastic in moderation, but unappealing in smothering doses.

Tip: Too much, even of something quite wonderful, remains—too much.

Subtlety is key. According to Jerome Stern:

Serious writers, including comic writers, are interested in subtlety, in avoiding heavy-handed effects and obvious characterizations. They want to make readers pay close attention, and readers enjoy picking up on clues as subtle as a hesitation or a dropped glance.

Readers expect novels to order chaos, but not to remove every doubt. Readers want lots of chocolate, but not as the main course. These questions might help.
Thomas Mann observed that


Subtlety is the mark of confidence… A writer who is confident need not prove anything, need not try to grab attention with spates of stylism or hyperbole or melodrama… He will often leave things unsaid, may even employ a bit of confusion, and often allow you to come to your own conclusions.

In other words, enough chocolate to satisfy (which could be a lot!), but not to overwhelm.
Posted by Laurel Yourke at 12:31 PM No comments:

The Silent Spaces of the Scene

Life is chaotic, fiction is focused. Reality tends toward amoral inconsistency. Fiction, though, from its inception, has conveyed meaning and significance through causal, focused character arc. Unlikely as it perhaps seems, the silent pauses of the story—the moments when readers supply what writers imply—help shape the moral world that expresses theme.

In Dialogue: The Art of Verbal Action for the Page, Stage, and Screen, storytelling guru Robert McKee, observes that  “Silence is the ultimate economy of language.”

Is this goal worthy? The English Definition Dictionary defines economy of language as “sparing, restrained, or efficient use, esp. to achieve the maximum effect for the minimum effort.” Isn’t that what every reader, and thus every writer craves?

Admirably, McKee, who is all about practicality, urges,

To master the technique of saying little but expressing much, first train your eye to see into the depths of the unsaid and the unsayable inside the people around you, then train your ear to hear the said.

So the novelist begins, as all the best novelists do, with observation, but of a very particular kind: watch first, listen after. Because it’s not just politicians who rarely say what they mean. What are you watching for?

What is the speaker doing? And are the movements and gestures consistent with the words?

Are they forthright or disingenuous? What might one slightly raised eyebrow mean?

This is the magical space where readers rule. What might they imagine when neither the characters nor the narrator says a thing?

Once you’ve done some psychological training with your eyes, train your ears.

Is the character hostile, sarcastic, subservient, or what? How might you communicate the speaker’s mood without casually, lazily, carelessly resorting to adverbs? Most of them “tell.”

Few of us say everything we mean. If we did, more people would get fired and divorced. Instead, we hint with questions like “Is that what you’re wearing?” Insinuation is at least as crucial in fiction as life.

Most fiction balances action with introspection. What integrates them? Silence. The not-so-empty pause between one movement of a sonata to the next engages the listener. Readers, too, require a brief delay to absorb what’s lyrical, appalling, non-negotiable, or inevitable. Silence can accentuate the midpoint of a novel, the climax of a scene, the motivational potential of a pressure point. Let your readers slow down so they compare, contrast, think, and appreciate.

Tip: Respect the need for moments of silence in your novel.
Posted by Laurel Yourke at 7:10 AM No comments: