Nature as Art, Art versus Nature

Nature hardly needs art to create breathlessness. Look closely. Define art flexibly. Isn’t every leaf or droplet “art?” The real question is whether art reproduces or imitates nature. Aristotle made this argument in response to his teacher Plato, who deemed everything but pure fact dangerous. What has this to do with you as a novelist? Everything.

Tip: Though nature is art, art itself originates in the imitation of nature.

Without that imitation, you get either:

Covering approximately 20 percent of the Earth’s surface, the Atlantic Ocean is the second largest ocean basin in the world, following only the Pacific. -- National Ocean Service 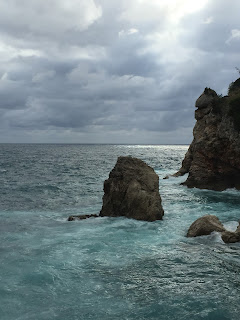 Neither of those creates a sense of place like these:

There was dull light all around, everywhere. When we walked on the crisp snow no shadow showed the footprint. We left no track. Sledge, tent, himself, myself: nothing else at all. No sun, no sky, no horizon, no world. ― Ursula K. Le Guin, The Left Hand of Darkness

The light was going: some cloud cover arriving, as if summoned by drama. ― China Miéville, Kraken

The color of the sky was like a length of white chalk turned on its side and rubbed into asphalt. Sanded―that was how the world looked, worked slowly down to no rough edges. ― David Guterson, The Other
After all, as Eudora Welty observed,

Every story would be another story, and unrecognizable if it took up its characters and plot and happened somewhere else... Fiction depends for its life on place.

To achieve that, translate nature into imagery that someone else can understand. You'll need:

~ Precision. No vague or abstract description.

~ Originality. The imagery that only you can deliver.

~ Symbolism. Make it so instantly comprehensible that it requires no explanation.

~ Drama. Setting that’s disconnected from plot has no place in fiction.

Nature makes art all the time, but fiction requires the vision that you alone can offer.
Posted by Laurel Yourke at 6:49 AM