The integration of character with plot moves us as few things can. Here’s an example. Among three 4-D shorts at Chicago’s Shedd Aquarium is “Sea Monsters: A prehistoric Adventure (National Geographic, 2007).

That genre and topic might sound irrelevant to the contemporary novel. Actually, though, the story of a young marine dinosaur named Dolly provokes acute understanding of evolution,  fossil hunting, and one prehistoric creature’s existence. The movie exploits adventure and mystery to teach science and connect with distance that’s difficult to conceive. Whether animated film or fiction, story lets humans remember, relate, perhaps even rectify. That’s the common thread between dolls, dolomite, and Don Juan, along with billions of other possibilities. All of it starts with character.

The star of this particular story is a Dolichorhynchops from the vast inland sea of Kansas 80 million years ago. That world feels close and vital less due to 4-D (including rumbling and a bit of splashing) than a protagonist with a plight culminating in more than one happy ending. 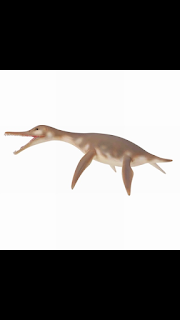 Empathy comes from identifying with another being—human or otherwise. Fortunately, face-to-face experience evokes kindness in most primates. But from afar, when beings vastly differ in appearance, lifestyle, habitat, or time span, empathy comes harder, too often disintegrating into a sense of “Other”: “You’re not like me, so I don’t have to care.”

That where story comes in. Once readers connect, they feel compassion, even when the species has an unfamiliar, unpronounceable name. Happily, characterization often shatters distrust of “Otherness.”

Dolly’s Super-Objective, or primary goal, is surviving long enough to reproduce. Around 80 million years later, paleontologists from Kansas to Australia, from 1918 to 2002, have their own Super-Objective. What can they learn about Dolly from the fossil she has become? Like all good stories, theirs has elements of mystery, of change.

The journey of a character, whether from another world, timeframe, or continent, always involves external pressure. The interaction between environment and Super-Objective instigates plot. The secret behind all those childhood favorites (“Curious George,” “The Velveteen Rabbit,” “The Little Engine that Could”) is the same secret that drives novelists from Jane Austen to Zora Neale Hurston: Will this character I’ve come to care about get the job done? By the deadline?

Strong plots follow the classical pattern: The protagonist is in trouble. As Charles Baxter put it, “Hell is story friendly.” Then the protagonist must have enough perseverance, chutzpah, and skill to continue struggling even when it seems hopeless. Dolly has quite a battle with that shark. And the entire audience breathes a huge sigh of relief when she escapes with only the small wound that will solve the mystery of her life story (a fragment of shark tooth embedded in her skeleton).
Plot and protagonist must be inseparable. Unless we care about the character, no amount of plot will matter. Unless something’s relentlessly progressing, even the best-drawn  character can’t sustain the story.

It’s the reward for integrated character and plot. Depending on how you interpret theme, every story has it, even if it’s mainly that detectives must look beneath the surface to compute whodunit, or love’s better the second time around, or look before you leap.

The themes in this short film are immense. The rocks are full of stories. Fossils are stories. The stories of the dead live well beyond their material existence. And those who hunt those stories become stories themselves.


Tip: Whatever you want to say, let your story—and only your story—say it.
Posted by Laurel Yourke at 8:42 AM