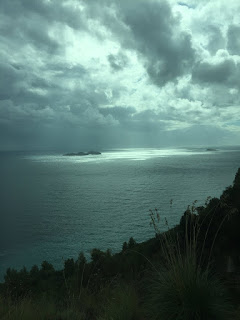 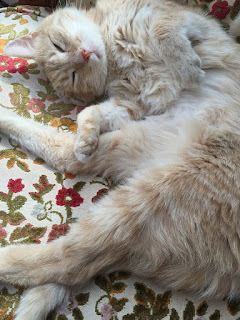 Neither including the sound "awww" nor "telling about the concept "awe"is likely to evoke the desired reader response. But "showing" either?  Perhaps juxtaposed? Ahhhh. Here’s why.

Awe comes from perceiving perception, as in Anthony Doerr’s All the Light We Cannot See:

To shut your eyes is to guess nothing of blindness. Beneath your world of skies and faces and buildings exists a rawer and older world, a place where surface planes disintegrate and sounds ribbon in shoals through the air. Marie-Laure can sit in an attic high above the street and hear lilies rustling in marshes two miles away.

Or from spirituality versus practicality in Colson Whitehead’sThe Underground Railroad:

Poems were too close to prayer, rousing regrettable passions. Waiting for God to rescue you when it was up to you. Poetry and prayer put ideas in people's heads that got them killed, distracting them from the ruthless mechanism of the world.

Don’t you experience awe when someone explains the incomprehensible?

Looking a dead insect in the sack of basmati that had come all the way from Dehra Dun, he almost wept with sorrow and marvel at its journey, which was tenderness for his own journey. In India almost nobody would be able to afford this rice, and you had to travel around the world to be able to eat such things where they were cheap enough that you could gobble them down without being rich; and when you got home to the place where they grew, you couldn't afford them anymore. ― Kiran Desai, The Inheritance of Loss

In contrast, “Awww,” like ice cream that never melts, is cleaner and happier:

Although there are times I'd give anything to have her back, I'm glad she went first. Losing her was like being cleft down the middle. It was the moment it all ended for me, and I wouldn't have wanted her to go through that. — Sara Gruen, Water for Elephants

But perhaps most effective of all is an unexpected pivot. In Jean Hanff Korelitz’s The Sabbathday River, the shift from “aww” to awe represents not a doll’s murder, but a child’s:

She saw, freshly, the two blond little girls in smocked dresses on the television commercial; she could hear the happy jingle extolling the doll's mind-bending ability to wet. And her name: Sallie Smiles! (The exclamation mark thoughtfully provided by the manufacturer.) Naomi Roth's parents--they of the Little Red School House and Pete Seeger persuasion--had been horrified, naturally enough, but she must have had her fill of ant farms and nonsexist creative discovery objects. The small blond pixies on the television were the company she kept in her fantasy of the parallel childhood she was not leading. She coveted the doll.

When it disappeared, less than a week after her birthday, she had waited before panicking.Then she approached her parents, whose unmistakable relief over her carelessness--the carelessness they assumed, despite her denials--was clear. Naomi's older brother declined to shed light on the situation, but months afterward it was from his window that she saw her doll again, grimy in city filth on the roof of the apartment building next door. It lay on its stomach against the asphalt, its bright face obscured, its fleshy pink hue bleached to stark white, and the legs between which it had wet so endearingly splayed to the extent of its somewhat limited hip sockets.

Tip: Expand your novel’s world by capturing rather than mentioning “aww” or awe.
Posted by Laurel Yourke at 8:58 AM